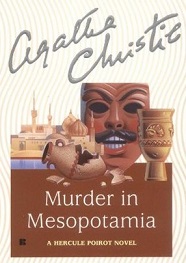 You gotta love Dame Agatha, bless her devious heart.  No one was better at planting red herrings and dreaming up convoluted plots.  And her little Belgian, Hercule Poirot, is one of literature’s classic characters.  But Christie used one irritating device — over and over again — that never fails to bother me:  mistaken identity.

A crucial character will be in disguise, or age will have altered his or her physical appearance, and other characters will be deceived by the ruse.  This would be understandable if the poser was merely an acquaintance, but often this person will be well known to the duped characters — and still go unrecognized.  I refuse to buy into that.  Mesopotamia, alas, features just such a deception.  But what the hell, Christie books are really just comic books for big kids, and in every other respect this novel is another treat from the queen of mystery.