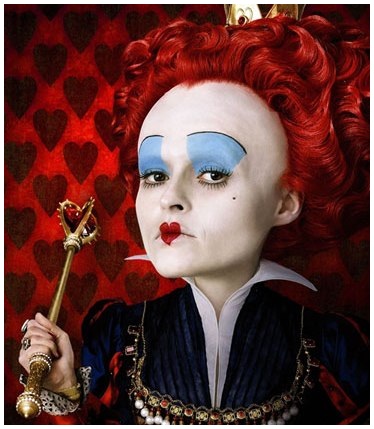 Alice in Wonderland is a smorgasbord of rainbow-hued vistas, mist-enshrouded glens, and hallucinogenic castles, most of it photographed in vivid, primary colors.  I haven’t had posters on my bedroom wall since college, but after feasting on director Tim Burton’s visual delights, I’m considering big ones of Helena Bonham Carter as the Red Queen and Anne Hathaway as the White Queen.  (I’ll tack them up right where Farrah Fawcett used to hang out.)  Burton’s images will be my lasting impression of Alice in Wonderland, I’m certain.  Unfortunately, I’m also pretty sure that everything else about his movie will fade from memory in no time at all.

I’ll forget that the surrealistic special effects were so eye-popping that I spent most of the film staring at them – completely oblivious to any plot developments.  I’ll remember Johnny Depp’s makeup as the Mad Hatter – and not recall that he was horribly miscast in the role.  Depp is a fine thespian, but the Mad Hatter requires a quirky, physically unusual actor, not someone who looks like a matinee idol in clown makeup.

Everything takes second place to the look of this movie.  Alice author Lewis Carroll’s written wit is not here.  There is nothing remotely humorous about what Tweedledum and Tweedledee have to say in the film, but boy, they sure look cool. Fake, but cool.

Alice in Wonderland is a prime example of what happens when story and character play second fiddle to computer and motion-capture effects.  I did not see Burton’s film in 3-D, and I can imagine it is even more visually impressive in that format.  But it’s a sad day when you go to watch a story by the great nonsense-writer Carroll, and watch it is all you do, no listening required.            Grade:  C- 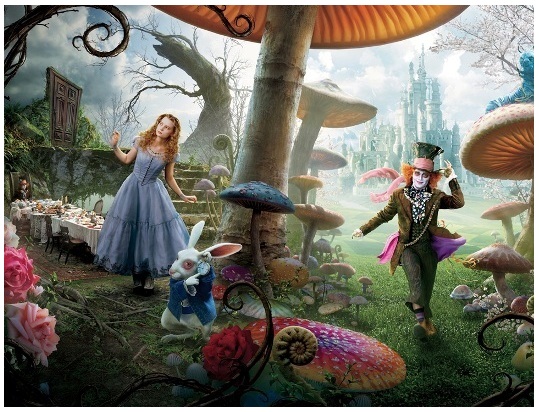 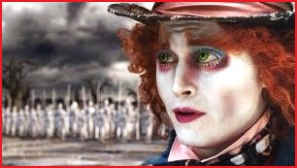