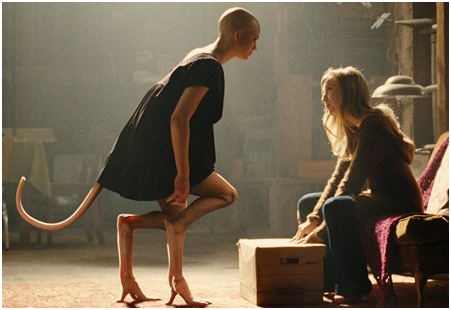 Midway through a screening of Splice at my local cinema, a man’s cell phone went off in the row behind me.  The recorded message was in Homer Simpson’s voice. The man apparently had trouble turning off his phone in the dark.  Normally, this kind of interruption during a film infuriates me, but not this time.  No, I wanted to listen to Homer Simpson.  Heck, I even thought about eavesdropping on the man’s conversation, if he’d let me.  Anything, and I mean anything, to help me escape the dreary business occurring on the movie screen.

The creature in Splice, a doe-eyed lovely called “Dren” (that’s nerd spelled back— oh, never mind), was learning how to spell with Scrabble tiles.  She had put together the letters T-E-D-I-O-U-S.  My feelings exactly.  I saw how bored the creature was, and now I wanted to chat with her and Homer Simpson.  Maybe they could empathize with me:  anything to stop this ridiculous story on the silver screen.

I wanted to like this movie.  Really, I did.  The director, Vincenzo Natali, impressed me with his 1998 feature, the clever science-fiction thriller Cube.  But whereas Cube was low-budget, fresh, and unpretentious, Splice has big-budget special effects, some fairly well-known actors – and not a shred of originality.  The protagonists, a scientist couple, start out bickering and never stop bickering.  Nothing could make this couple happy; not a major scientific breakthrough, not their well-paying jobs, not even their movie-star looks. 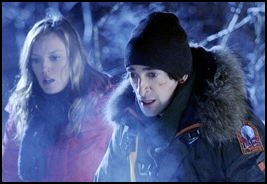