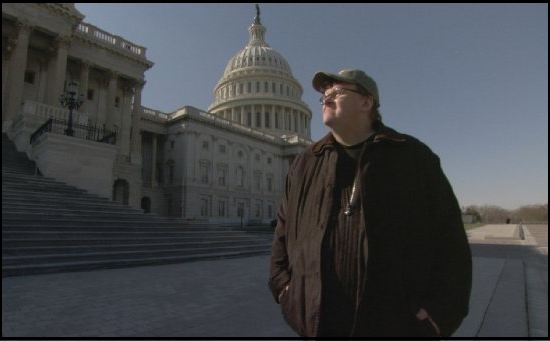 At the end of Capitalism: A Love Story, filmmaker Michael Moore pauses in his narration and says, “You know, I can’t really do this anymore.  Unless those of you who are watching … want to join me.”  It’s an understandable sentiment.  Moore has been railing against societal ills — both real and perceived — for more than 20 years now, ever since he finally chased down General Motors CEO Roger Smith in Moore’s breakthrough documentary, Roger & Me.

Will Moore’s latest tantrum make you reach for the Alka-Seltzer?  I’m sure it will.  No matter what your political leanings, Capitalism will confirm your worst fears.  If you’re anti-establishment, Moore’s anger will infect you.  If you’re more status quo, Moore himself will infect you.

As usual, his tactics are one-sided.  Are none of the evicted homeowners he champions guilty of having eyes bigger than their wallets?  With all its inherent problems, didn’t capitalism also turn the United States into an economic superpower?  Those questions are brushed aside in this movie.

But Moore presents so much damning evidence against the other side (“evil” capitalists) that any thinking person has to conclude that something has gone very, very wrong.  And Moore can hardly be accused of liberal partisanship this time around:  His most vicious skewering is reserved for Democratic senators like Chris Dodd and Barack Obama’s economic advisers.     Grade:  B+