by John Heilemann and Mark Halperin 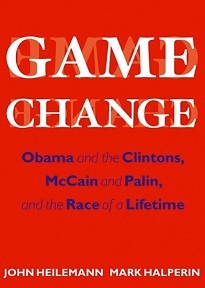 If you’re a politics junkie, you won’t find much new in Game Change.  The 2008 presidential campaign has already been covered exhaustively, from cable TV to the blogosphere.  In fact, unless you simply cannot get enough politics, there isn’t much reason to buy the book.  What it does offer is juicy bits of gossip about the candidates and their spouses.

Heilemann and Halperin will no doubt be accused of liberal bias, but of all the dysfunctional (to put it mildly) political couples they showcase – the McCains, Palins, Edwardses, Clintons, and Obamas – only the Obamas come off as people you would remotely want to run the country, even though one of those couples already has.