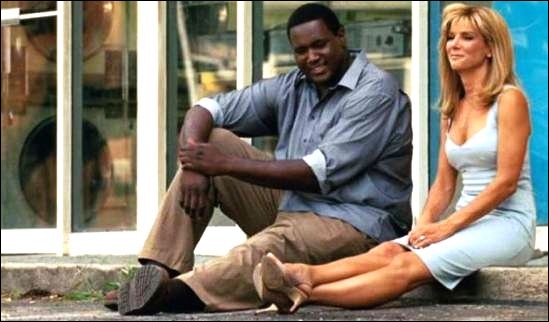 Since The Blind Side is purportedly about football, allow me to divide the film into halves:  The movie scores in its first half, but develops a severe case of fumble-itis in the second half.  Half One works well because it skillfully manipulates the audience.  There is nothing wrong with that.  All movies “manipulate” the audience — that’s what directors and editors are paid to do.  It’s only when we don’t care for a flick that we use the “M” word derisively.

Blind Side gets off to its great start on the strength of star Sandra Bullock’s charisma.  Bullock is the queen of feistiness and the half-smile.  Her youngest child says something precocious?  Cut to a Bullock half-smile.  Her husband does something endearingly stupid?  Close-up shot of that half-smile.

Into Bullock’s charmed, upper-middle-class life comes Michael Oher, a teenaged giant from the Memphis slums with a teddy-bear personality and no place to sleep at night.  Bullock and her brood take the kid in.  I haven’t read the Michael Lewis book upon which  Blind Side is based but, according to critics who have, what follows in the film is very loosely based on the truth.  Young Michael’s adaptation to the privileged, white world of the Tuohy family was not so tidy in reality.

But no matter.  This is a Hollywood movie, and director John Lee Hancock’s artistic liberties make for a touching and funny first half.  Ironically, The Blind Side starts to collapse the minute its focus turns to football.  No amount of manipulation can change the feeling that we’ve seen this plot many times before, and even Bullock’s charm can’t stave off the staleness.     Grade:  C+