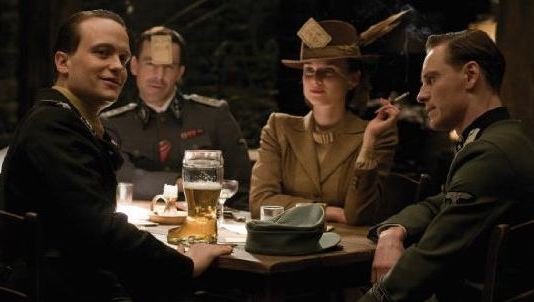 Quentin Tarantino’s Inglourious Basterds is really two movies, which is a shame, because one of them is pretty good.  Tarantino’s World War II revisionist revenge story has some seriously suspenseful scenes.  I’m thinking, for example, of the lengthy prologue and a later scene that takes place in a basement tavern.  You watch these scenes and the tension absorbs you.

Alas, we also have the second movie.  This second film stars Brad Pitt in a foul-mouthed update of Lee Marvin’s character in The Dirty Dozen, and it features lots of goofiness and gore.  It’s as if Tarantino could not make up his mind:  create a nerve-wracking war drama, but also lampoon them, the better to attract the snark-loving youth market.  And so we get a cartoonish portrayal from Pitt, spaghetti-Western music, and Batman-like graphics (I half expected “BAM!” and “ZOWEEE!” to appear during fight scenes).  Tarantino’s two films don’t mesh.

As for the much-ballyhooed performance by Christoph Waltz, the pundits’ pick for a Best Supporting Actor Oscar, Waltz is good.  But if you prefer your Nazis with a bit more subtlety, I recommend August Diehl in a less-showy role as Major Hellstrom, oozing menace in the aforementioned tavern scene.       Grade:  C+