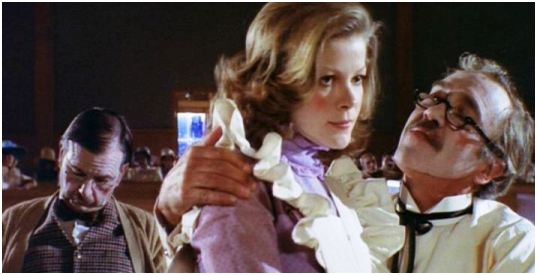 It’s hard to say who might be more offended by the cult classic A Boy and His Dog:  feminists, the citizens of Topeka, Kansas, or sperm banks.  I’d vote for sperm banks, because institutions generally have little or no sense of humor.

The genesis of this low-budget oddity is a Harlan Ellison novella, which tells the story of Vic (the boy) and Blood (the dog), two roving souls in post-apocalyptic America, circa 2024.  Vic (Don Johnson) is the dumb one, a hormonal homeboy who at least has sense enough to recognize the “smart” one:  Blood.  The dog, for some unexplained reason, has developed an ability to communicate telepathically, which he uses to deliver some wickedly funny one-liners (particularly the last line of the film).  Blood also boasts more mundane dog skills, such as sniffing out scarce food — and even scarcer human females.

When Vic is seduced by a female recruiter from the (literal) underworld, our scruffy heroes are given a choice:  remain above ground, where vicious bands of males fight for food and women, or follow Quilla June Holmes (Susanne Benton) to the land down under.  Vic wants to go with his new girlfriend; Blood does not.  I mentioned which of the two of them was smart, didn’t I?

Ellison’s story posits some interesting questions.  Is it better to live free but among savages (the “natural” state), or in a society where everyone must conform or face dire consequences for “lack of respect, wrong attitude, [and] failure to obey authority”?  In the world portrayed by A Boy and His Dog, this is not an appetizing choice.

But if Boy is infamous, it’s not because of any social questions it raises; it’s because of its notorious ending, in which Blood proves to be “man’s” best friend, indeed.  Is the ending misogynistic?  Is the entire movie misogynistic?  I’d say yes, but then I’d be like that sperm bank and totally devoid of a sense of humor.  Perhaps it’s just a matter of taste.       Grade:  B