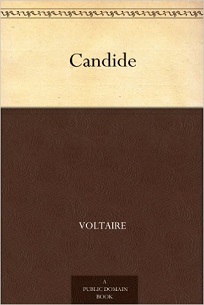 Poor Candide. Raised on a wealthy German estate, with his own tutor and the world as his oyster, one fateful day he is rudely expelled from his idyllic home and in short order finds himself abused by a Bulgarian army, beaten, robbed, and tortured by a series of strangers, and nearly devoured by cannibals. Worse, Candide’s beloved cousin, the beautiful Cunegonde, is abducted and becomes the sex slave of one dastardly man after another.

Sound like a satire to you? It is in the hands of Voltaire, whose detached, bemused narrative moves at lightning-pace as he takes aim at the prevailing “wisdom” of 18th-century philosophers, including the folly of thinkers (like the aforementioned tutor) who preached that “all is for the best.” The only problem with this entertaining novella is that, unless you happen to be a European historian, you’re not likely to recognize the contemporary targets of Voltaire’s wit.