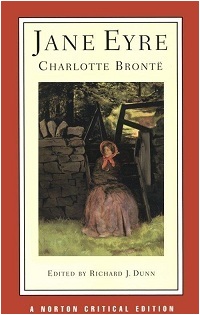 Until now, my exposure to Jane Eyre has been limited to four-letter answers in many a crossword puzzle.  I thought of Bronte’s 1847 novel as one of those stuffy classics that I really should read – someday.  So now that the deed is done, I’ve learned that the book has pleasant surprises … and also that it confirms some of my worst suspicions about 19th-century “chick lit.”

Good:  By far the biggest surprise is a creepy subplot about a mysterious entity that lives on the third floor of Thornfield, a family mansion that serves as most of the story’s setting.  This … thing, conjuring images of Linda Blair at her demonic worst in The Exorcist, likes to pay unexpected, middle-of-the-night visits to sleeping guests on the floor below.

Bad:  There is much character analysis by narrator Jane, who goes on ad nauseam about everyone’s good qualities, bad qualities, religious beliefs, social standing, grooming habits, forehead shape, and bristly eyebrows.  But that’s nothing compared to poor, repressed Jane’s endless self-analysis and, at times, self-pity.  Can you say, “inner turmoil”?

Good:  The best novels allow you to completely escape your own world, and there’s no greater diversion from the 21st century than 19th-century literature.  Bronte’s England is at once familiar and foreign, and it sucks you in.

Bad:  Jane Eyre is all about character, which is fine, but its plot doesn’t hold up to scrutiny.  There are amazing coincidences (Jane, near death in an unfamiliar part of the country, just happens to be rescued … by a man who turns out to be her cousin), and contrived plot developments (a character who creates an obstacle for two lovers commits suicide, thereby clearing the way for a happy ending).