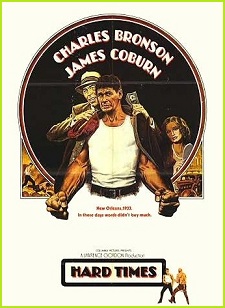 I’m old enough to remember Charles Bronson back in his heyday, and it’s impossible to dismiss his once-formidable popularity.  In 1975, he was Hollywood’s fourth-highest box-office attraction, behind only Redford, Streisand, and Pacino.  A few years earlier, he received a Golden Globe for being “the most popular actor in the world.”  I never really understood his appeal, but Hard Times (1975) is Bronson in the midst of good times.  Watch it for free by clicking here.