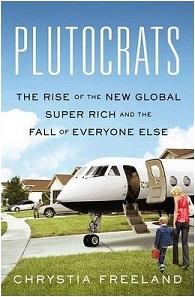 Plutocrats is the type of book you suspect will make you angry before you turn a single page.  The subtitle alone is hackle-raising:  The Rise of the New Global Super-Rich and the Fall of Everyone Else.  The fall of “everyone else”?  This book probably will piss you off – but don’t blame the messenger.

Freeland, a financial journalist, makes the case that there is alarming income inequality in most countries – but you probably already knew that.  She interviews a laundry list of the ultra-rich, determines how these men (almost always men) rose to the top, and speculates on what it all means for “everyone else,” i.e., the 99 percent.  Is vast income disparity the inevitable result of capitalism?  Is it possible that the wealth chasm is actually a good thing?

Plutocrats documents how the actions of Big Business are benefiting, if not the American middle class, then certainly new middle classes in emerging world markets such as China and India.  It’s hard to argue that that’s a bad thing.

But our billionaires and millionaires are not exactly selfless.  Many of them, particularly in the United States, feel victimized by government regulation and taxes, and they don’t understand why they are increasingly demonized by the 99 percent.  They do contribute to charity, but those contributions treat the symptoms of inequality, not the problem itself.

Freeland doesn’t come right out and say it, but she implies that only government can place checks on Wall Street and corporate America.  That might be anathema to conservatives and libertarians, but after events of the past five years, isn’t it common sense to everyone else?  Apparently not, for as Freeland writes:

“That’s the irony of superstar economics in a democratic age.  We all think we can be superstars, but in a winner-take-all economy, there isn’t room for most of us at the top.”