By the way, I’m with George Jetson in the picture above. I don’t know why the rest of his family (and Astro) seem so enamored of Zoom.

Zoom, in my humble opinion, sucks. 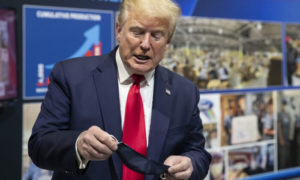 Pundits are speculating that Trump’s refusal to wear a mask is a jab at the media: He doesn’t want to give them the satisfaction of a photo op of his capitulation. He’s even admitted as much.

But not everything is about Trump vs. the media.

Isn’t it more important that Trump – and other elected officials – put their masks where their mouths are to set a good example for the rest of us?