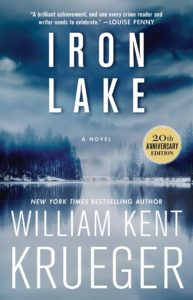 There is a dead judge and a missing boy in the northern Minnesota wilderness, and it’s up to our hero, a small-town, mild-mannered ex-sheriff, to save the day.

Iron Lake is an OK thriller, but it’s oh-so-familiar. If you read enough of these crime novels (I’m guilty), many of the protagonists – Jack Reacher, Harry Bosch, or in this case, Cork O’Connor – begin to morph into the same character. The hero will be a hard-headed, middle-aged man, often a cop or ex-cop, who drinks and smokes and broods over a lost love. And then there is a call to action, often involving a family member or that lost love, and our hero proves his mettle against all odds. Only the settings change in many of these books.

Iron Lake was of interest to me because this time the locale was not L.A. nor New York, but rather rural Minnesota, where I grew up. The story was fine; the characters were fine; but mostly this was nothing new.