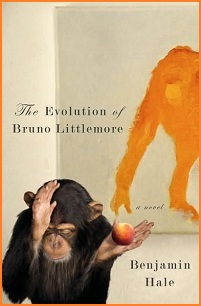 The Evolution of Bruno Littlemore is narrated by a talking chimpanzee.  “Bruno” is not a very pleasant ape.  He has learned a lot of big words, and he loves to parade them.  Although he’s a regular-sized chimp and he’s plagued by insecurities, his ego is the size of King Kong and he feels superior to most primates – including humans.  Especially humans.  Does that sound like the kind of “hero” with whom you want to spend 576 pages?  At first, I didn’t think I wanted to, but I’m glad I hung in there with Bruno, because this book is an absolute knockout.  Hale, who is all of 27 years old (the bastard!), has written a debut novel that practically screams out, “Literature is not dead!”

Bruno is not without flaws.  There are times when the reader’s suspension of disbelief is sorely tested; this is, after all, a talking chimpanzee we’re asked to accept.  But the book works on so many levels:  unforgettable characters, penetrating insights about human nature; comedy and tragedy.   Mostly, it’s the irascible, disturbing Bruno himself that will stay with you – whether you want him to or not.