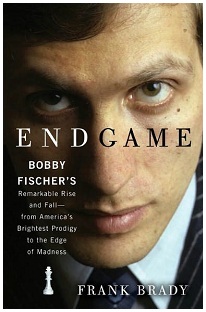 If you are an undisputed champion in one area of life, does it necessarily follow that you are the master of everything else?  That seems to have been Bobby Fischer’s perspective – and downfall.

Brady, who knew the American chess master for most of Fischer’s life, had a tough task in compiling this biography.  Fischer wasn’t so much reclusive as he was abusive; cross him once, and he would erase you from his world.  That obstacle might explain why, fascinating though Endgame is, it leaves so many unanswered questions.  Why did Fischer have no meaningful relationships with women (other than his mother) until late in life?  Why was he declared unfit for the draft during Vietnam?  Who was his biological father?  Brady does capture Fischer’s volatile personality, including painful examples of his many anti-Semitic, anti-American, and anti-Soviet rants – along with other, what might kindly be called “eccentricities.”  Mostly, Endgame is a harrowing examination of the demands and pitfalls of celebrity.