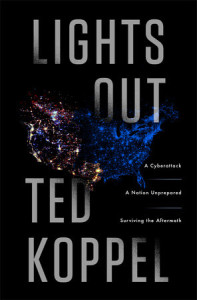 As if this country doesn’t have enough to worry about, what with strained race relations, domestic terrorism, war in the Middle East, and income disparity, along comes doom-and-gloom Ted Koppel to issue a warning about what might be our biggest existential threat: a cyberattack on the nation’s power grids. In Lights Out, Koppel interviews security experts both in and out of government and makes a convincing case that should some rogue nation – or even a small band of hackers – choose to shut down our computer-reliant electrical system, the ensuing crisis could resemble … well, have you seen Mad Max?

A large chunk of America without power for weeks or even months is a frightening scenario, and probably another case of “when it happens,” not “if it happens.” And when it does, the United States is woefully unprepared. Much of our unpreparedness boils down to that old bugaboo, privacy vs. security. How much of the former are we willing to sacrifice in order to achieve the latter? The conundrum reminds me of the death penalty, another issue over which I’m an admitted hypocrite. I am against the death penalty – until someone I care about gets butchered by some remorseless jerk. I am also against government intrusion into my Internet life – until hackers black out the entire Midwest.

Koppel’s advice isn’t particularly helpful or practical: Government and individuals must be better prepared. Feel better now? Should the worst happen, I’m thinking your best course of action is to befriend a Mormon family, move in with them in Utah – and bring a gun.