I’m tempted to slap The Collection with an “F” for its bare-bones plot and ridiculously excessive gore.  However … if you are into splatter flicks — I generally am not — this sequel to The Collector is better than most of its gore-horror brethren thanks to a decent budget and some slick, fast-paced direction.  Release:  2012  Grade:  B-

All the Boys Love Mandy Lane

The camera certainly loves Amber Heard, who plays one of six teens who (yawn) encounter trouble at an isolated ranch.  Director Jonathan Levine also seems to love stilted dialogue, “scares” that don’t scare, and a twist that any horror-film fan can see coming from a mile away.  This mediocrity was filmed in 2006 but sat on a shelf for seven years, awaiting distribution.  Too bad it’s not still sitting there.  Release:  2013  Grade:  D+

Here’s proof that you can have an astronomical budget and Brad Pitt for a leading man … and still produce just another silly zombie movie.  Brad plays a perfect family man (of course) who saves the world (naturally) while fighting off hordes of the undead.  The zombies are not particularly original, but they do look cool in some overhead CGI shots.  Release:  2013  Grade:  C- 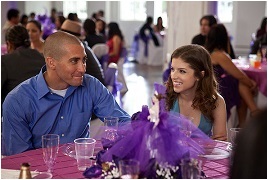 If you’re not a big fan of police, End of Watch could change your mind — at least for a couple of hours, thanks to the chemistry between Jake Gyllenhaal and Michael Pena as two patrolmen in South Central L.A.  There isn’t a great deal of story, but it’s refreshing to watch a crime drama in which the cops are neither bad to the bone nor avenging super studs.  Release:  2012  Grade:  B+