A Test of Wills 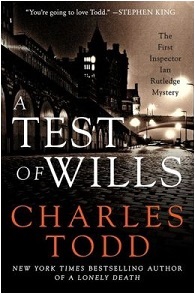 A test of patience for whodunit fans, as a Scotland Yard inspector conducts a monotonous series of interrogations with small-town murder suspects.  “Charles Todd” (the nom de plume for a mother and son writing team) has also invested the inspector’s conscience with an annoying presence – the voice of “Hamish,” a Scottish soldier whom our hero sentenced to death during World War I.  I will say this for the authors:  Their “big reveal” at novel’s end is not a bore; rushed, overwrought, and utterly ridiculous, certainly, but not a bore.