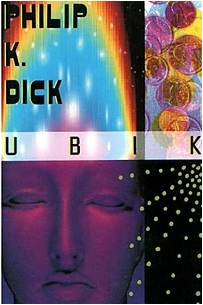 There are reasons I’m not a big fan of most science fiction.  Ubik, by sci-fi legend Philip K. Dick, is a case in point.  Dick’s futuristic tale of life-after-death and alternate universes has some fascinating ideas and some amusing situations – but it also has paper-thin characters and dialogue, and clunky prose.  I can deal with fantasy leaps of logic when they are served up by an H. G. Wells, but Dick was no H.G. Wells.

When I finished Ubik, I felt much the same way that Dick’s main character does in mid-story: “Very confusing, Joe Chip said to himself.  He did not like it at all.  Granted it had a satisfying symmetrical quality, but on the other hand, it struck him as untidy.”