I am mystified as to why Netflix often has the Midas touch when it comes to producing original TV shows, while at the same time it cranks out so many Lifetime network-level original movies.

The same streaming service that gives us, for example, the superb Ozark, this past week premiered Oxygen and the Amy Adams vehicle The Woman in the Window.

Oxygen, from France, wasn’t exactly “bad,” and it does feature one truly memorable sequence when the heroine discovers what actually happened to her immediate environment (she’s confined to a claustrophobic pod). But I’m guessing I won’t remember much about the movie six months from now.

Window won’t make anyone forget its most obvious inspiration, Alfred Hitchcock’s Rear Window. The much-anticipated thriller boasts an impressive A-list cast, with Gary Oldman, Jennifer Jason Leigh, and Julianne Moore lending support to Adams, who plays an agoraphobic who apparently witnesses a murder across the street. It is also apparent that Netflix, or some other entity, spent a bundle on the production itself.

But the story? Nah. Watch Rear Window again, instead. Or Ozark. 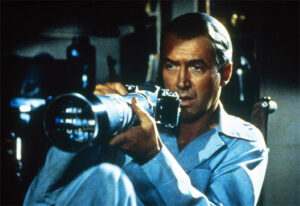 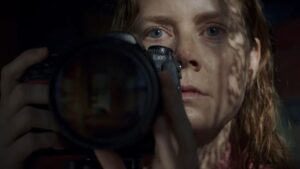 Top, Jimmy Stewart in Rear Window. Bottom, Amy Adams in The Woman in the Window.

I guess I feel about Joe Biden the way so many lefties felt about Donald Trump. I can only observe the guy for a limited period of time while the country falls apart. Then I turn to Netflix.

Evidently, proofreading skills — or writing skills, or editing skills — are no longer a requirement to write headlines for most Web sites. If anyone can please explain the meaning of the Little Fish headline above, I will send you a free copy of The Woman in the Window.