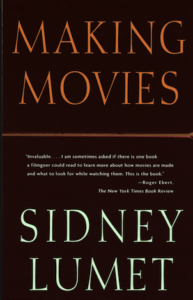 We often hear movie directors described as artists (the good ones) or box-office kings (all too often, the bad ones). But I think that the best of them might better be described as superb “craftsmen.” They don’t just mold the story and the actors; they are on top of every technical detail. Think of Alfred Hitchcock — or Sidney Lumet.

Making Movies is a great book for film students and film nuts (people like me). It is not for you if you are seeking juicy gossip about celebrities. You’ll also be disappointed if you are interested in biographical information about Lumet. Other than a few brief mentions of his wife, there is next to no personal data.

But Lumet, who died in 2011, directed some of my all-time favorite films, including Fail Safe, The Verdict, Dog Day Afternoon and Running on Empty. Behind-the-scenes details about any of those gems are catnip to me. This book is loaded with them.

Some of Lumet’s observations about the trials and tribulations of making films are dated, because this was published in 1996, long before digital movies and streaming services like Netflix became commonplace. But what hasn’t changed is the passion and devotion to a single goal common to most great movies — and great moviemakers. For that sort of thing, this is a book for you.