Sorry about that. That picture is from a GEICO commercial. 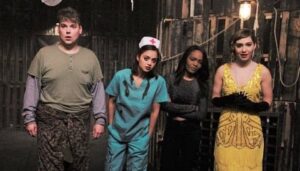 I liked the premise of this movie because it’s simple, like most horror movies should be. Terror at a haunted house. If it was good enough for The Texas Chain Saw Massacre, it should be good enough for Haunt.

But once our heroes arrive at the spooky joint, I was instead reminded of the GEICO commercial in which clueless kids run from a chainsaw-wielding maniac — rather than hop in a running car and simply drive away. In Haunt, our heroes encounter a gang of deranged people who, for reasons that are never explained, decide it would be fun to create an elaborate maze with which to terrorize random young people.

I began clock-watching — always a bad sign — to see how much longer the movie would last. At least the Geico commercial was only 30 seconds long.  Release: 2019  Grade: C-