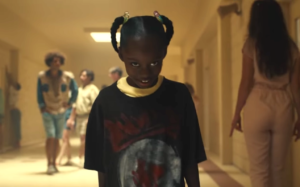 Jordan Peele’s 2017 hit Get Out created a stir because it was a rarity: a horror movie with smarts. Critics gushed because, face it, when it comes to the scary-movie genre, the bar is awfully low. But to me, Get Out failed to achieve goal number one:  it wasn’t particularly frightening.

Not so with Us, Peele’s 2019 follow-up. Lupita Nyong’o stars as the female head of a family of four that encounters their wicked doppelgangers while on holiday in Santa Cruz, California. This time, Peele pleases both critics – there is symbolism galore; what do the doubles represent, the global underclass? Our individual dark sides? – and horror-film aficionados. Peele wisely puts the scary first, the message second.

Also, it turns out you can spend all the money you want on special effects or monsters or gore, but there’s nothing more terrifying than a knowing, evil grin — especially from someone who looks just like you. Release: 2019 Grade: B+