“This quoted Tweet is unavailable.” I am seeing way too much of this kind of thing on Twitter.

If I so choose – and lots of people do – I could post the most vile, disgusting pornography on my feed and that, apparently, would be fine by Twitter. But someone’s political statement must be censored?

Also, love him or hate him, millions of us follow Trump on Twitter, if only to see what outrageous thing he’ll say next. So how come his posts never show up on my feed? 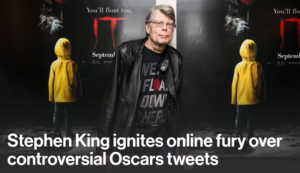 Poor Stephen King. Now he knows how J.K. Rowling must have felt last year when she ran afoul of the social justice mob. When you feed the woke beast, someday it will want to eat you.

I tend to agree with Penguin Piers on this one. I also tend to hate myself because, dammit, I do get caught up in all of this British royals nonsense.

Lara Logan Has No Agenda on Fox: She’s a journalist, so of course she has an agenda – even if it’s just going after other journalists and their agendas.

What about the women who willingly slept with Harvey Weinstein just to advance their careers?

I can’t be the only one who would be interested in that story.