The scenario is familiar by now: Donald Trump will do or say something outrageous, and the media speculation begins. Did Trump really mean what he said? Or was it part of some clever plan? Is Trump “crazy like a fox”?

This ongoing debate about the state of Trump’s mind reminds me of Chance the gardener in Being There, the Jerzy Kosinski novel later adapted into a film starring Peter Sellers.

Here is how Wikipedia describes Chance: “He is simple-minded and has lived there his whole life, tending the garden. Other than gardening, his knowledge is derived entirely from what he sees on television.”

Here is what Politico wrote this week about Trump: “Leaving him alone for several hours can prove damaging, because he consumes too much television and gripes to people outside the White House.”

In Being There, no one is quite sure if Chance’s plain-spoken pronouncements are words of genius or the blathering of an idiot. At the end of the story, Chance is the leading contender for President of the United States. 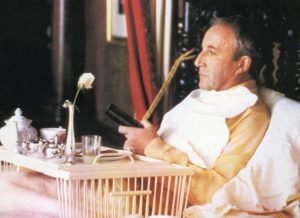