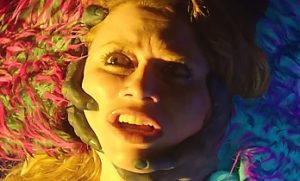 Antibirth reminds me of those 1980s late-show curiosities in which the characters are frequently stoned and, evidently, the films’ directors had also been smoking something. Think Re-Animator and B-movies of that ilk. Danny Perez’s sloppy, gory, hodgepodge of horror has a campy plot – something is growing in the heroine’s womb, and it doesn’t seem to be human – but it’s often a hoot, thanks to an anything-goes performance from Natasha Lyonne as the pregnant stoner and a tone that evokes the best (or worst) of those wacky late-show relics. Release: 2016  Grade: B

If you’re in the mood for some mindless summer fun – and who isn’t in the dead of winter? – you could do a lot worse than The Shallows, in which poor Blake Lively gets stranded on a rapidly submerging rock while a circling shark eyes her for dinner. After a dubious first act, in which the director seems more interested in filming Lively’s bikini-clad, muscular buttocks than in creating suspense, the movie delivers some solid, if also ridiculous, thrills. But hey, “jump scares” are allowed when it’s a shark movie you’re watching.  Release: 2016 Grade: B