Free Flick of the Week: “Dick”

Here’s a comedy I have not seen but want to, because I find the premise irresistible: Two 15-year-old girls (Kirsten Dunst and Michelle Williams) who live at the Watergate complex, circa 1972, accidentally get involved in a burglary (yes, that burglary) and wind up meeting our 37th president.  Click here to watch it for free.

The Hunger Games     Jennifer Lawrence brings the same rural charm she rode to an Oscar nomination (for Winter’s Bone) to this entertaining, if overlong, spring blockbuster.  The story — in the future, society’s upper class keeps the underclass in line by staging a televised battle to the death among selected young people — isn’t all that original, but Gary Ross’ stylish direction and Lawrence’s appeal produce riveting spectacle.  Release:  2012  Grade:  B+

The Descendants     George Clooney plays a Hawaiian lawyer who, after his wife is left comatose by a boating accident, must grapple with two rebellious daughters, greedy relatives, and one life-altering revelation.  Nobody does Middle-Aged-Man-Under-Stress stories better than writer-director Alexander Payne (Sideways), whose movies click because their characters, although often behaving foolishly, worm their way into your heart.  Release:  2011  Grade:  A-

A Separation     A tense, intimate look at honor and justice, Iranian-style, as a man separating from his wife faces prison for accidentally causing — or not — a miscarriage suffered by a family caretaker.  The clinical, faux-documentary style (shaky camera, no music) employed here adds to the story’s realism but also leaves what should be an emotional drama feeling a bit cold.  Release:  2011  Grade:  B+ 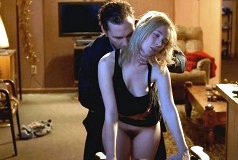 Killer Joe     A black comedy that aims for twisted humor but mostly misses the mark.  Members of a Texas trailer-trash clan hire a hit-man (Matthew McConaughey) to bump off a family member for the life insurance — but double-crosses are afoot.  The acting is good, and the direction by old pro William Friedkin is slick, but any grins and giggles are drowned out by an off-putting abundance of sadistic sex and graphic violence.  Release:  2012  Grade:  B- 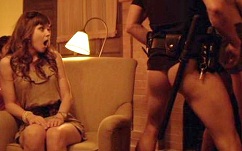 Magic Mike     The cable channel Cinemax used to specialize in movies like this (and maybe still does):  Innocent youth takes job at strip club; older stripper takes kid under wing; bad things happen, anyway.  Swap out the usual no-name cast for some Hollywood stars, add a slumming director (Steven Soderbergh) with a decent budget, trade all that girlish flesh for beefcake in thongs, and you have Magic Mike, voyeuristic claptrap that’s no better — or worse — than those late-night Cinemax flicks.  Release:  2012  Grade:  C-