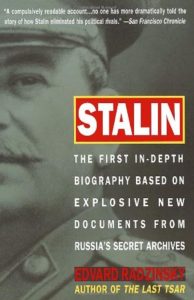 Stalin is a historical biography that I admired but … did I enjoy it? Let me put it this way: Reading this 600-page beast often felt like being banished to Siberia with nothing to do but page through the telephone directory. I do respect the blood, sweat and tears that must have gone into the research and writing of this massive tome about the 20th century’s greatest villain, Joseph Stalin (yes, I’m including Hitler), but the result is mostly a plodding bore.

In addition to presenting the usual agglomeration of unpronounceable and confusing Russian names, Radzinsky’s book demands a basic knowledge of Russian history and the major political players of the time. If you are unfamiliar with the historical relationship between Bolsheviks and Mensheviks, the troubled history of Ukraine and Russia, etc., well, too bad for you. Radzinsky simply offers a chronological survey of what Stalin did and to whom he did it. Stalin himself remains an enigma. So many details, so little insight.

It’s a shame, because if we know one thing, it’s that history repeats itself, and if a genocidal despot like Stalin could place an entire country under his malevolent spell, then understanding the factors that created such a monster is something we all need to know.