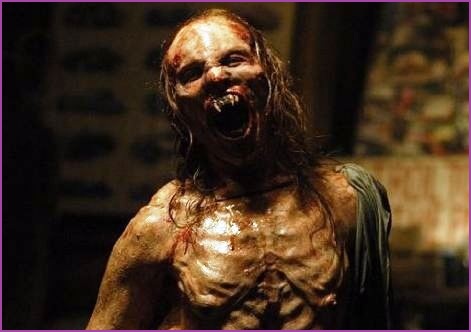 Daybreakers is a vampire movie with a social conscience.  It’s a horror film that doesn’t settle for violence and gore; it also wants to make you think.  And that’s what’s wrong with the blasted thing.

As the movie unfolded and began to bombard me with allusions to 1) class warfare, 2) immigration, 3) vegetarianism, 4) capitalism, 5) conservation, and  6) the kitchen sink, I could picture the directors (two brothers again; what is it with all these sibling directors — do studio heads now demand them?) planning their DVD commentary.  No simple discussion of wooden stakes and garlic for the Spierig brothers.  Nope, they would discuss social issues!  That’s an admirable goal for a movie with just one hitch — a vampire film first and foremost needs to be scary.  If you get that part right, then you can discuss serious stuff on the DVD.

(Confession:  I haven’t seen the DVD.  Perhaps there isn’t any commentary, but you get my point.)

I also kept thinking of another vampire movie I recently watched, called 30 Days of Night.  That film worked because it had a very simple plot.  A horde of scary-looking bloodsuckers descends on an Alaskan village and does battle with the townspeople.  That’s pretty much it.  Danny Huston plays a truly terrifying vampire, and not once as I watched him was I reminded of conservation.  Or immigration.

I’d go into the plot details of this film, but if you’ve seen I Am Legend, you pretty much get the idea.  A terrible virus or plague or something mutates most humans into blah, blah, blah.  Daybreakers, by trying to make big statements, is instead a pretentious little bore.          Grade:  C- 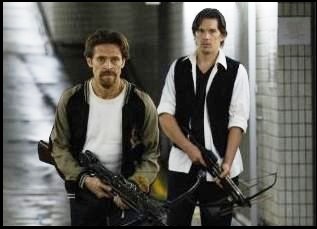