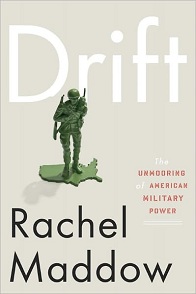 Reading a book like this one can fill you with hope or despair.  Hope, in that there are still good Americans (the one percent of our population comprising the volunteer military) and vital journalists like Maddow; but also despair, because as the proverb says, the more things change, the more they stay the same.

The cycle goes like this:  Presidents and institutions gain power and then proceed to abuse or misuse it.  There is public outcry, restraints are instituted – and those presidents and institutions resist mightily.  Good intentions lead to unforeseen disaster.  These patterns are repeated throughout history.  Your choice, as an average citizen, is to be outraged, depressed, or desensitized.  Maddow’s book makes the case that, since the Reagan administration, Americans have become desensitized to war, and this attitude is encouraged by politicians (right and left) who prefer that most voters be removed from the actual cost of endless military adventures.

I suppose it’s a product of  my age, but I believe that a lot of the material in Drift would have outraged me when I was younger.  Now, mostly, it just depresses me.