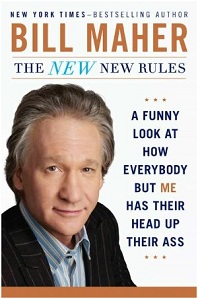 I’m tempted to call Bill Maher a genius – but if I did that, I might be accused of self-flattery, because I happen to agree with about 95 percent of his opinions.  No, that’s not true:  96 percent.  If you lean left like me, Maher is your man, because he counters any “bleeding-heart-liberal” charges with take-no-prisoners wit.

As Maher points out in the foreword to New Rules, this is primarily a joke book, with hundreds of one-paragraph zingers targeting pop culture and everyday life.  The jokes are usually clever, often true, and frequently funny.  But Maher also includes dozens of longer essays – mostly about politics – and this is where he does us pinkos proud.