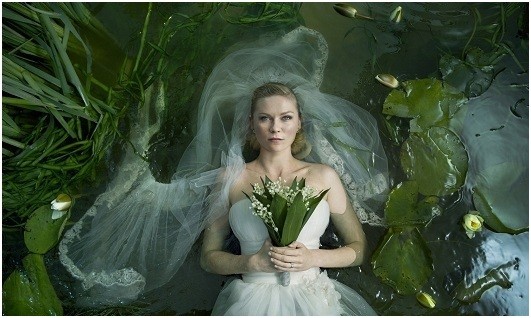 My dictionary defines melancholia as “a condition characterized by extreme depression, bodily complaints, and often hallucinations and delusions.”  The definition says nothing about frighteningly big, rogue planets on collision courses with Earth — I’m thinking “hysteria” might be a better word for that scenario.  But Melancholia is the name of the planet doing a “dance of death” with Earth in director Lars von Trier’s new movie, a strikingly original piece of work with images and themes that are haunting.

Von Trier sets up his doomsday drama at a leisurely pace, examining another type of melancholy in the debilitating depression that grips Justine (Kirsten Dunst), a new bride with the eerie ability to “know things.”  Justine’s instincts tell her that marriage to the son of her wealthy employer was a bad idea, and they also tell her things like the exact number of beans in the lottery-jar at her wedding reception … and that the star in the sky that brother-in-law John (Kiefer Sutherland) insists is Antares is no such thing — and that the glowing orb seems to get bigger every day.

If Melancholia has a weakness, it’s that Part One (“Justine”) verges on overkill; we understand that Justine is depressed, now can we please move on with things?  In Part Two (“Claire”), von Trier finally turns the screw, with disaster approaching in the sky and everyone’s world turned upside down.  This is no Deep Impact, with cardboard characters servicing the special effects.  Instead, von Trier exercises restraint, creating a creeping dread that culminates with some unforgettable scenes. 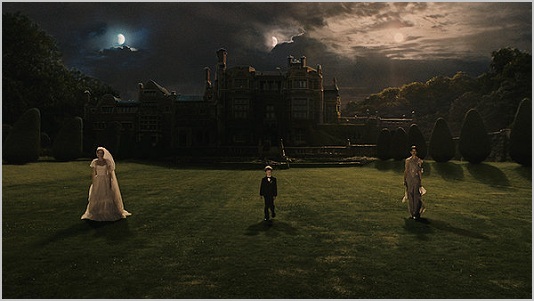 Claire (Charlotte Gainsbourg), Justine’s sister and a true believer in the power of ritual, begins to fall apart.  Her husband John sees his faith in science and material resources unravel.  As the ominous ball in the sky grows larger, Claire asks, “It won’t hit us?”  “Not a chance,” John replies.  Claire persists:  “But what if your scientists have miscalculated?”

Ironically, it is only Justine, the impulsive, runaway bride, who remains calm.  But her take on the pending end of the world (presumably von Trier’s take, as well) is less than reassuring.  “The Earth is evil,” she says, “We don’t need to grieve for it.  Nobody will miss it.”  Even more unsettling is her reply to a question posed by Claire.  “Life is only on Earth,” she says, adding, “and not for long.”

All of the actors are first rate in Melancholia, but this is von Trier’s triumph.  The images are dreamlike, and his use of Wagner’s prelude to Tristan und Isolde on the soundtrack is stirring.  The themes are downbeat, yet absorbing.  Melancholia is no battle between religion and science, because they both take it on the chin.        Grade:  A- 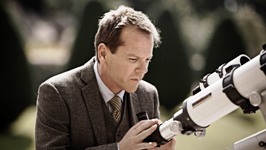 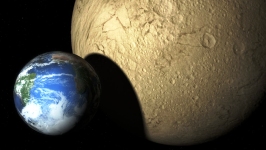 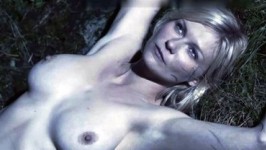