Dance of the Jocks

In my drinking days, I would often find myself at parties in someone’s garage or backyard, standing amidst a huddle of straight guys near a keg. Because my powers of observation are akin to those of Sherlock Holmes, I would notice a little “dance” that these dudes would invariably perform — particularly if they were jocks, past or present. It was if they had crapped their pants and were hoping to shake the nasty stuff out the bottom of their pant-legs.

I thought of this on Sunday when I tuned in to the NFL pre-game show on Fox, in which the show’s hosts — all of them ex-jocks of one sort or another — did the same dance I observed at those long-ago keg parties (see video above). But why?

I suspect that, although most of the Fox men are closer, age-wise, to rocking chairs than to football fields, they were signaling to the world that they had lost no youthful virility. Just say the word, and they were all ready to carry that ball over the goal-line.

I also suspect that, during commercial breaks, the aging jocks stop their macho dance and stagger for relief from nearby oxygen tanks.

I didn’t think it was possible to have a so-called “Republican” worse than Lindsey Graham, who seems hell-bent on sabotaging his own party in the November elections. But I’d forgotten about this guy: 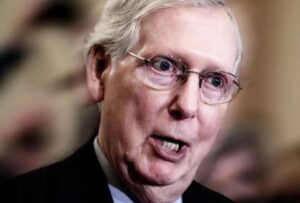 Graham and Mitch McConnell are both happy to sell out to the globalists/Democrats/Chinese — just so long as they get to keep their own cushy seats at the elites’ table.

I still enjoy a good TV show. But I can no longer stand most of the people who make them. And so, I no longer tune in to watch actors and other Hollywood morons as they pat themselves on the backs at awards shows.

According to the sinking ratings for the Emmys, looks like I have lots of company.

We’re finding out just how “compassionate” these liberals are, aren’t we? It’s a perfect example of “Not in My Backyard!”

If you’re one of those people who “can’t stand politics” because you’re bored by it or don’t think your actions — or lack of actions — make any difference, then you are chiefly responsible for the demise of America.

This weaponization of law enforcement (and the media) is beyond awful.

Coming tomorrow, a new Tale From The Grouch — “Ted’s Head.”