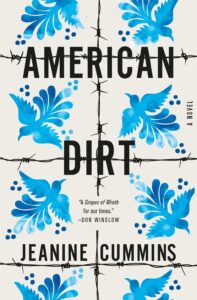 American Dirt is nothing if not controversial, what with its white, European-American author telling the tale of a middle-class Mexican woman whose life is upended — to put it mildly — and who chooses to make a harrowing journey from Acapulco to Arizona with her eight-year-old son in tow. Illegally.

The book’s critics say Cummins took pains to make the story palatable for American readers, and that her heroine, Lydia, is an unrepresentative, atypical immigrant. The critics might be right. What the hell do I know?

The novel was a bestseller last year. But all hell broke loose upon its publication.

The uproar over Dirt brings to mind James Frey’s A Million Little Pieces, which came under fire for being hyped as a memoir when, in fact, it was fiction. Fact-based or fabricated, Frey had written a remarkable book. Pieces was a marketing failure, not a writing failure.

I can only comment on what I read in American Dirt, and as a work of fiction, it’s a superb thriller.

As for the novel’s politics, yes, it is very one-sided, very pro-immigrant and pro-immigration. There is even one none-too-subtle jab at Trump. But immigration is a huge story, with many subplots.

Someone else could write an equally moving, largely anti-immigration story, I’m sure. A story about an illegal immigrant, a career criminal who wreaks havoc on a small American border town, for example.