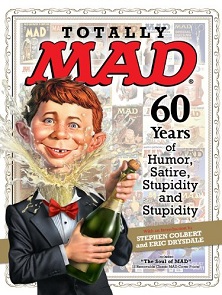 What, me worry?  Yes, unfortunately.  This coffee-table sampling of 60 years of MAD magazine disappoints on a number of fronts.  Many of the selected articles are incomplete; the type is often impossible to read without a magnifying glass; and, last but not least, there is not enough Don Martin.  There can never be enough Don Martin.

Another problem, probably one that could not be helped, is that much of MAD’s humor is topical – and topical humor tends to lose bite over time.  Marlon Brando jokes from the 1950s don’t quite cut it in 2013.

It might have been a better idea to do what Dark Horse Comics did with old issues of Creepy and Eerie, and publish a series of books containing entire issues of MAD; if they had done so, I would have been happy to buy editions representing, say, 1964 to 1970.   But I don’t want to be too harsh on “the usual gang of idiots,” because there are a lot of funny bits in this 256-page collection, and nostalgia seekers will surely find some nuggets.