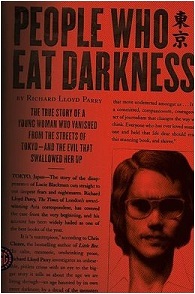 When it comes to “true-crime” material, journalist Parry had a lot to work with for this book:  a mysterious, cold-blooded rapist/killer who used charm and loads of cash to lure victims; an intriguing culture clash between East and West, as the British family of victim Lucie Blackman descends on the Land of the Rising Sun to seek justice for Lucie, who was eventually found – in pieces – buried in a seashore cave; and the lurid setting of much of the book:  the bizarre night world of Roppongi, a Tokyo red-light district where Lucie worked as a “hostess.”

What Parry delivers is a workmanlike recounting of the hunt for Lucie, followed by the trial of middle-aged Joji Obara, who comes off as a combination of Jay Gatsby and Hannibal Lecter,  certainly the strangest “date rapist” in Japanese history.  But Parry is handicapped by never landing an interview with the enigmatic Obara, which turns People into a poignant, but not particularly compelling, story of the luckless Blackmans.