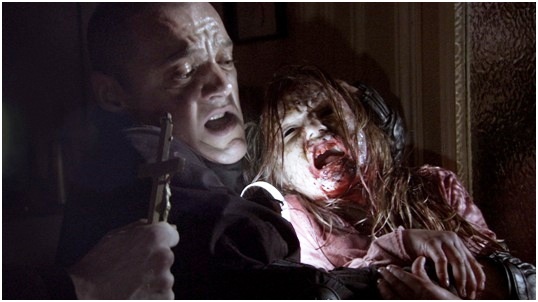 [Rec] 2 is one of the dumbest horror movies I’ve seen in quite some time.  If you’re looking for a few good scares, I highly recommend it.

I suppose that sounds contradictory.  All I can say is, when you go to a fright flick, what exactly are you looking for – intellectual stimulation, or something that makes you jump out of your seat?  In a perfect world, an audience gets both, a la The Exorcist or Rosemary’s Baby.  [Rec] 2 is no art-house classic, but it does its main job and delivers some genuine jolts.

Let me describe the plot.  On second thought, I can’t do that.  The plot is ridiculous, but it’s also beside the point.  Suffice to say there is a creepy old apartment complex in Barcelona, Spain.  Some kind of virus (or demonic possession, or both) has infected the people inside, turning them into bloodthirsty savages (or zombies, or demons, or both).  Humanity’s only hope is to secure a blood sample from a young girl who was the first infectee (or Satan’s spawn, or something like that).  A Spanish SWAT team (or something like that) is dispatched to the building to save the day.  Virus, possession, demons, zombies … whatever.  The only thing that matters is that we now have potential victims in the building.

This is the kind of script in which police use a bullhorn to warn everyone away from the windows – and within seconds one of the protagonists stands in front of a window.  This is the sort of movie where our heroes are inundated with gore, carnage, and psychological horror – but their overriding priority is to make sure the video camera is still recording.

It’s a stupid plot and a stupid movie.  But if you are willing to turn your brain off for 85 minutes, it’s a lot of fun.  Directors Juame Balaguero and Paco Plaza know that handheld photography can be effective on a purely visceral level.  Combined with ominously claustrophobic apartment hallways, the jerky visuals enhance each attack.  By showing some, but not quite all, of the demonic assaults, the effect is often chilling.

The best way to enjoy [Rec] 2 is by turning your own brain into a handheld camera. Watch and record everything, but try not to think about it.        Grade:  B- 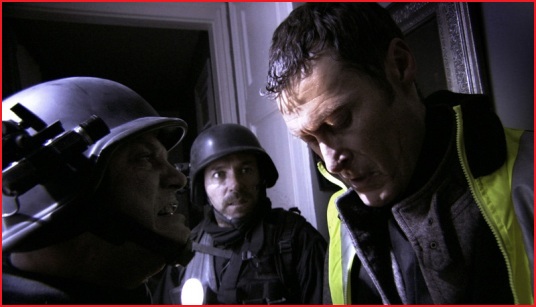 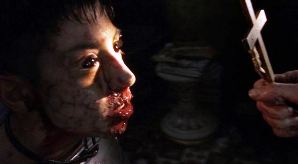