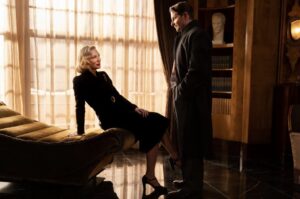 Critics love movies like this one because they check so many boxes: impressive cinematography, big stars, somber tone, striking art direction, etc.

Let me add a few boxes of my own: Nightmare Alley is too long, there are very few, if any, relatable characters, and did I mention that it’s too damn long?

That’s a bit harsh. As always in any Guillermo del Toro film, the visuals are gorgeous. The subject matter does require a serious tone. And yet ….

I kept comparing the movie to Double Indemnity, another noir about a doomed con man (in Alley, the grifter is played by Bradley Cooper). Fred MacMurray’s insurance agent in Indemnity had a more wrenching downfall because — until he fell into the clutches of femme fatale Barbara Stanwyck — he was an average Joe. He was relatable. Cooper’s con artist is a bad egg from the start, so it’s hard to much care when things go sour for him. Release: 2021 Grade: B 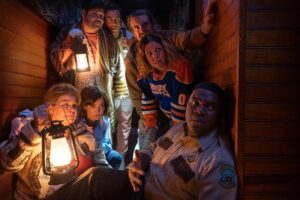 A small group of local yokels are trapped in a snowbound country inn — and one of them is a surreptitious werewolf. What’s not to like about that setup?

Werewolves is silly and predictable and yes, you’ve seen it all before, but in the hands of director Josh Ruben, it feels fresh and fun. Release: 2021 Grade: B+