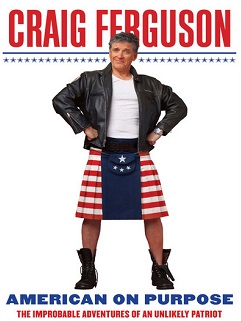 TV late-night host David Letterman recently announced his retirement, but I think I’ll miss his follow-up act on CBS, Craig Ferguson, even more.  Ferguson, who will be leaving his late-show gig in December, is a funny, affable guy, and that winning personality is on full display in this 2009 memoir.

Possibly I enjoyed the book because — aside from the born-and-raised-in-Scotland business — Ferguson and I share similar backgrounds:  We’re about the same age and we both drank way, way too much alcohol in our younger days.  I do have two quibbles with American on Purpose.  Quibble 1 – the title is a bit misleading; it would more accurately be titled Growing Up Drunk in Britain.  Quibble 2 – Ferguson gushes about former wives and girlfriends, understandably when you consider his behavior toward them, but also unrealistically.  Were all of his former flames such stunning beauties and flawless human beings?  But overall, this is a charming memoir, and I look forward to a sequel.  There will be a sequel, right?