You see a movie when you’re a kid, and you think it’s the greatest.  Many years later, one night after you’ve paid bills, mowed the lawn, and put the kids to bed, you notice that your beloved old movie is playing on the late show.  Your first emotion is nostalgic; you remember adoring this film, no matter how silly it might have been.  Your second reaction is more practical:  Most of the movies you loved as a child and then re-watched as an adult turned out to be, well, pretty bad.

So it was with a healthy dose of skepticism that I recently watched Robinson Crusoe on Mars, which I fully expected to put the kibosh on my fond memories of the first time I saw it, lo those years ago.  It would probably suck – even the title of the film is goofy.  But I watched anyway.  And … what a pleasant surprise!

The plot:  Two astronauts and a test monkey are orbiting Mars when a near-collision with an asteroid forces an emergency evacuation to the surface of the planet.  Just one astronaut successfully lands and, a la Daniel Defoe’s island castaway, he must use his training and wits to survive the harsh Martian environment.  Also per Defoe’s story, eventually there is a “Friday.”  Not so like Robinson Crusoe, we also meet evil space aliens.

The pros:  1)  When I see special effects in something recent like The Avengers, I usually have this thought:  “Wow, that looks really cool – and fake.”  When I see special effects in Robinson Crusoe on Mars, I have a similar response, yet there is something more impressive about a 1960s art department designing and photographing spectacular visuals, as opposed to a cadre of computer geeks moving a mouse to achieve similar effects.  Director Byron Haskin, a special-effects wiz who ten years earlier filmed the classic The War of the Worlds, combines studio FX with real Death Valley footage to make sci-fi magic.  2)  TV veteran Paul Mantee, as the hero, will never be mistaken for Daniel Day-Lewis, but he’s adequate and what his astronaut thinks, does, and says (he has that monkey to talk to) is always credible.  Mantee’s activities on Mars in the early stages of the film are just plausible enough, science-wise, to hook us so that we don’t run for the exit when things later get wacky (the arrival of those space aliens).

The cons:  1)  This was filmed several years before Kubrick’s 2001: A Space Odyssey revolutionized special effects, and so the Martian vistas do look artificial.  They also look imaginative and incredibly cool.  2)  Some of the science presented is dubious at best, but hey, this was 1964.  Giant fireballs cruising the surface of the red planet?  Why not?  3)  I suppose you could argue that the (white) hero’s relationship with (dark-skinned) Friday is borderline racist – I wouldn’t. 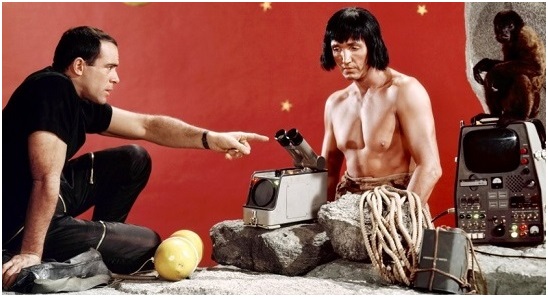 Mantee, Lundin, and “Mona” the monkey on set.