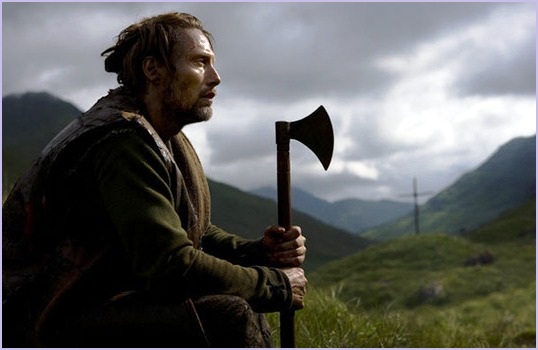 You have to wonder how much time actor Mads Mikkelsen spent examining his own face in the mirror after accepting the lead role in Valhalla Rising, an artsy/gory Viking saga set in 1000 AD.   As the enigmatic warrior-slave “One Eye” (his character has, uh, one eye), Mikkelsen utters not a single line of dialogue in the film.  Not one.  Compared to this brooding Norseman, Clint Eastwood’s “Man With No Name” was a veritable Chatty Cathy doll.

Mikkelsen does, however, spend a lot of time gazing.  Sometimes he casts a meaningful gaze.  Other times, it’s a haunting gaze.  From time to time, he displays a mournful gaze.  And when he’s having a “vision,” his gaze turns bloodshot red.  One Eye might not say much, but the man does have an active fantasy life.

I suppose you could argue that in medieval Britain, there wasn’t that much to talk about.  Life in 1000 was short and brutal; “instant messaging” was likely a pickaxe to the skull, and too much gabbing got in the way of looting and pillaging.  When One Eye escapes bondage and joins up with some Christian Vikings, “conversation” often consists of a simple question, followed by 45 seconds of silence, and then, with any luck, a perfunctory reply.  Or more likely, additional gazing.   At times in this film, I longed for the sophisticated verbal interplay of, say, Deathstalker.

There is also very little plot in the film.  Again, you could argue that outside of simple survival, there wasn’t that much to do in 1000.  Director Nicolas Winding Refn fills a mid-movie script hole by sending his crusaders on an interminably long ocean voyage.  To give him due credit, Refn’s visuals are often striking, and his movie (shot in Scotland) is certainly atmospheric; in fact, at times it is nothing but atmosphere.  But I digress.  Back to our crusading heroes:  The Christian Vikings’ quest for fame and fortune in Jerusalem takes a nasty wrong turn somewhere, and the bearded ones wind up discovering North America.

After that endless sea voyage, I was prepared for a rip-roaring windup to the movie.  Surely, One Eye would stop his soulful gazing long enough to engage in some sort of bloody battle.   I checked his resume, and learned that director Refn’s recent credits include – of all things — a TV episode of “Miss Marple.”  After all that refined gentility, Refn would certainly cut loose with a testosterone-laden, heart-pounding climax to Valhalla, wouldn’t he?  Alas, once again I was destined to pine for Deathstalker.  A North American savage clobbers One Eye on the head, our hero keels over, and the end credits roll.  This disappointing denouement dumbfounded me, and I could only sit before the screen, gazing mournfully.       Grade:  C 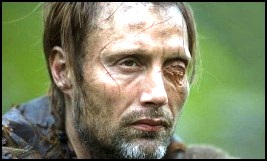