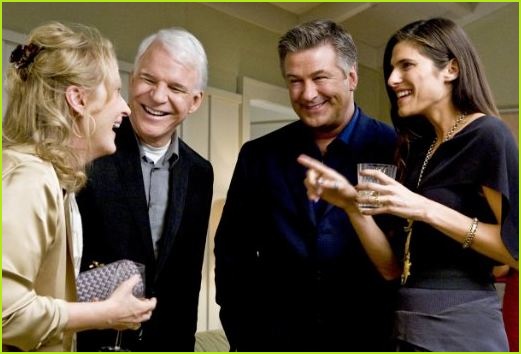 As I suffered through the early stages of It’s Complicated, writer-director Nancy Meyers’s latest comedy, I came to the unhappy conclusion that the problem was my gender.  Clearly, I could not relate to this “chick flick.”  Probably I did not appreciate – or worse, even notice – a parade of designer clothes, kitchens, and bathtubs as it passed before my bloodshot eyes.  Probably I was genetically incapable of grasping the romantic plight of the film’s heroine, a middle-aged, divorced mother of three played by Meryl Streep.

Shortly after I reached this dismaying conclusion, I changed my mind and began to blame Meyers’ script, instead.  Streep’s character was being wooed by her ex-husband (Alec Baldwin), a one-dimensional, pot-bellied cad panicked by his loveless marriage to a one-dimensional shrew without an ounce of humanity.  Silliness ensued.  I’ve seen this plot before, I thought.  Too many times.

And then, like a bolt from the blue, the movie knocked me senseless in its second hour with not one, but two bursts of inspired comic lunacy.  The first involved Streep, Steve Martin, and a marijuana joint, and the second showcased Baldwin, Martin, and an invasive laptop computer.  It was as if old pros Streep, Martin, and Baldwin, just as tired of the insipid storyline as I was, suddenly told Meyers to just point the damn camera at them and see what they could do.

Those two scenes are very funny and they rescue the second half of the film.  Too bad, though, about that first half.      Grade:  C+ 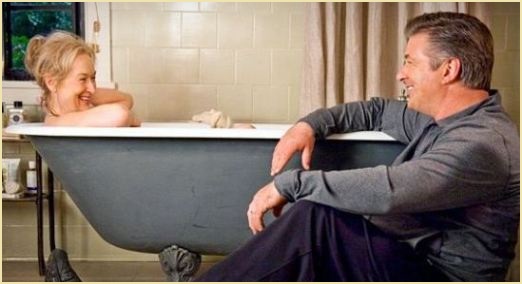 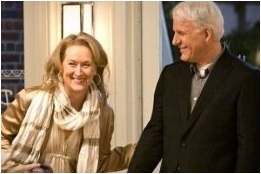