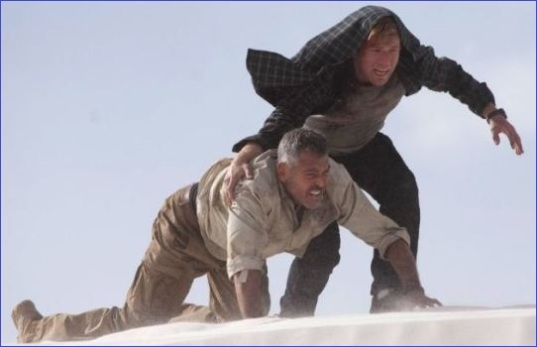 “Though The Men Who Stare at Goats is a mostly entertaining, farcical glimpse of men at war, some may find its satire and dark humor less than edgy.”

Those aren’t my words; that’s the consensus of critical opinion posted by the editors at Rotten Tomatoes, a Web site devoted to film reviews.  Here’s my reaction to that consensus:  What the hell???

“Less than edgy”?  Talk about understatement.  Goats is a dreadful piece of work.  What makes it even worse is the fact that everyone involved with this movie seems so darned pleased  with it, as if they were making the new millennium’s version of M*A*S*H.  Fellows, you were not.

George Clooney, Kevin Spacey, Ewan McGregor, and Jeff Bridges (how many more variations of “The Dude” is this actor going to foist on us?) star in this “wacky” sendup, loosely based on a real government program in which the military attempted to use New Age mysticism, paranormal activity, and the kitchen sink to revolutionize modern warfare.   I’m guessing that a lot of this stuff looked hilarious on paper, what with its spoofs of both the military and hippy cultures.  I’m also guessing that directors like the Farrelly brothers might have somehow added some zing to this mess.

But regardless of who’s at fault, “less than edgy” doesn’t begin to describe how bad this film is.     Grade:  D