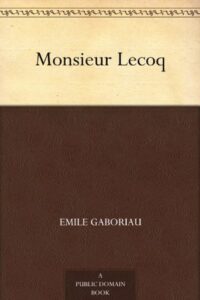 I can hear it now: Monsieur Who?

Edgar Allan Poe is often cited as the father of the modern detective novel, and everyone is familiar with Arthur Conan Doyle’s legendary sleuth Sherlock Holmes. But I’m guessing that few readers are aware of the link between Poe and Doyle: French author Emile Gaboriau, who penned detective novels clearly influenced by Poe’s C. Auguste Dupin and in turn a major inspiration for Doyle’s Holmes.

I suspect Gaboriau’s novels have slipped into relative obscurity because they lack Poe’s mastery of mood and Doyle’s strong characterizations. Monsieur Lecoq, a young, ambitious policeman whose chief attributes seem to be self-doubt and confusion, isn’t particularly memorable, and Gaboriau’s prose can be a bit wordy and dense.

Still, if you’re a fan of 19th-century crime fiction, Lecoq’s investigation of an enigmatic man accused of a triple murder is an entertaining read.