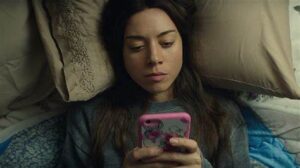 Ingrid Goes West aspires to be All About Eve for the social-media generation, but there’s a crucial difference. In Eve, the characters were snakes — but snakes with charm and wit. In Ingrid, the characters are snakes, but shallow and witless.

Only in the third act does the movie come to life, when Ingrid sheds her creepy stalker persona and reveals herself to be a genuine human being. Release: 2017  Grade: B