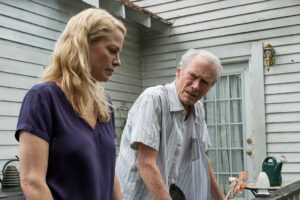 In the crotchety-old-man phase of Clint Eastwood’s long career, I prefer his 2008 drama Gran Torino. But The Mule, directed by Eastwood in 2018, is very much a “Clint Eastwood movie.” That means I’m on board.

Eastwood’s Earl Stone is an elderly ne’er-do-well who stumbles into a new career as a “mule” for a Mexican drug cartel. Earl capitalizes on his harmless appearance to transport cocaine and other bad things from state to state.  The question is, how long will his luck hold out?

If you prefer a goofy, affable Eastwood to a cantankerous, retired Dirty Harry — the Eastwood we got in Gran Torino — then Mule may appeal to you more than it did to me.  Release: 2018  Grade: B-