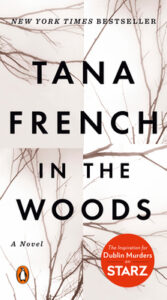 What to say about the ambiguous ending when it pops up in books and movies? Some people like it, others are outraged. I happen to think that when it works, it can be brilliant. Case in point:  1974’s Black Christmas, in which the audience never finds out who the killer is. Hey, isn’t that what sometimes happens in real life? But when the ambiguous ending does not work, well … heavy sigh.

French’s debut novel gives us not one but two mysteries, one about a cold case involving some missing children, the second about a recently murdered girl. If you expect that by the end of the book you will have satisfying answers to both mysteries, well, French does provide one resolution.

Another issue:  The author’s decision to go with first-person narration by one of the protagonists, a male cop, doesn’t always pan out. It occasionally comes off like a female writer’s idea of how the straight man’s thought processes work. For example:  Reflecting on a recent romantic conquest, our man doesn’t think of the actual act; he ponders his lover’s hair, or some such thing. Nice try, but no cigar.

For the most part In the Woods is a compelling read. French is a talented writer whose prose I enjoyed, and I was never bored. Yet that ending simply feels like a cop-out.