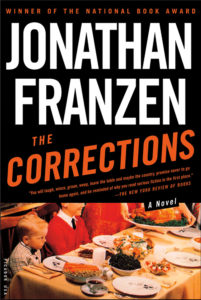 Confession: I’ve resisted this book for years, in part because its author, Jonathan Franzen, has a reputation (deserved or not) for being something of a jerk. He’s not exactly Mr. Warmth and Cheer on his talk-show appearances, and then there was that little issue with Oprah Winfrey.

Franzen is a spectacularly gifted writer. His insights and prose are endlessly inventive. He deftly mixes elements of Shakespearean tragedy with humor straight out of Kurt Vonnegut. He chooses the perfect word, the perfect phrase to illustrate his scenes. The major theme, in which members of The Greatest Generation and The Me Generation collide with societal change and with each other, is important to many Americans. National Book Award voters honored The Corrections in 2001, and justifiably so.

However … this was a novel that I admired more than I enjoyed. The characters, although fully realized and recognizable, are not what I’d call endearing, and the reader is asked to spend 566 pages with them.  Unless you grew up in a family much like the Lamberts – (ahem) – The Corrections might engage your mind but not so much your soul.