Disclaimer 1:  I have not seen all of the films generating Oscar buzz.  Two films in particular – 127 Hours and Waiting for “Superman” – have given me the slip, so I reserve the right to change certain predictions and preferences after I see them.  But I have seen the majority of 2010 movies that give critics like Roger Ebert a 2 a.m. stiffy.

Disclaimer 2:  Unlike some critics, I don’t pretend to have in-depth knowledge of the technical categories.  I liked the look of The Book of Eli, but I have no clue if those super-cool visuals came courtesy of the art director, cinematographer, production designer, director – or some combination of the preceding.  Similarly, I can’t tell you if the bathtub scene in Black Swan is so effective because of great editing, sound effects, or the guiding hand of director Darren Aronofsky.  So I am copping out of all predictions and preferences in the technical categories.  On the other hand, I feel I am as qualified as the next joker to tell you which movie I thought was best, and which performance, and which story.

Will Win:  The Social Network

Should Win:  The Social Network

A boring pick, I know.  I think a lot of people could have made this prediction before the film was even released.  The Social Network was clearly a matter of the right people tackling the right subject at the right time.  Aaron Sorkin, David Fincher, and a film about Facebook – how could it lose?  It won’t.

My top five films of the year (alphabetical):  Blue Valentine, The Ghost Writer, The King’s Speech, Never Let Me Go, The Social Network

Should Win:  Annette Bening (The Kids Are All Right)

Bening made me forget I was watching a politically correct movie about an “unconventional” family.  Instead, I simply appreciated her fleshed-out, highly amusing character.  Portman’s emotional arc in Black Swan ranged from concerned expression to worried expression to very-uptight expression.  Portman does, however, masturbate in one scene and engage in oral sex in another.  That’s the kind of thing, I have read, that impresses Oscar voters as a display of “guts and determination.”  Reminds me of 2001, when Halle Berry had to get naked and simulate sex with Billy Bob Thornton for Monster’s Ball – talk about guts and determination.  Bening does not have sex in The Kids Are All Right, and she does not have the advantage of 500 close-ups, as does Portman in Swan.  But “guts and determination” will carry the day.

Firth’s main competition is Jesse Eisenberg of The Social Network.  Eisenberg was superb – but was he portraying the real Mark Zuckerberg, or Zuckerberg as imagined by writer Aaron Sorkin?  I’ve seen Zuckerberg in televised interviews, and he seems nothing like the hostile, antisocial young man played by Eisenberg in the film.  But should that even matter?  Eisenberg’s intense portrayal was riveting, fact-based or not.  But Firth has at least two things going for him:  He lost to Jeff Bridges last year (sympathy factor), and he absolutely nailed an acting challenge in The King’s Speech:  a convincing stutter.

Will Win:  Melissa Leo (The Fighter)

Should Win:  Melissa Leo (The Fighter)

I don’t see any performance out there strong enough to top Leo’s scary mother hen in The Fighter.  Amy Adams?  She was good, but I doubt that I was the only one watching her and thinking:  “That’s Amy Adams acting with a Boston accent.”  Leo wins, but I think this is a weak category.

Should Win:  Christian Bale (The Fighter)

This is a tough call.  I won’t be unhappy if either of them wins. 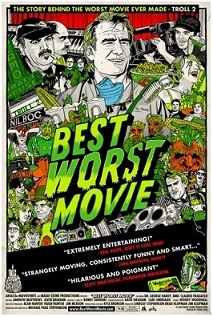 Will Win:  Waiting for “Superman”

If I had to put a label on 2010, I’d call it The Year of the Documentary.  There was a period when nearly every week saw the opening of another first-class nonfiction film.  These docs fell into two general categories:  old-fashioned, “just the facts, ma’am” films (Countdown to Zero, Client 9, Joan Rivers), and a new breed that blurs the line between fact and fancy (Catfish, Exit Through the Gift Shop, I’m Still Here).  Most of these movies had serious subject matter.  My favorite documentary of the year, however, had ridiculous subject matter:  the filmmakers and fans behind Troll 2, reputedly the worst movie ever made.  Best Worst Movie is my pick because it has that most elusive of all qualities:  charm.

Will Win:  The Social Network

Should Win:  The Social Network

Ten years ago, Sorkin was reinventing TV dialogue with his rat-a-tat exchanges in the superb The West Wing.  He hasn’t lost his touch.

Will Win:  The King’s Speech

I have nothing against The King’s Speech; as a crowd-pleaser it excels.  It was Rocky with royalty.  Blue Valentine had a tougher assignment:  It made depressing material compulsively watchable.

Polanski has absolutely no chance of winning, and might not even be nominated.  That doesn’t bother me much because I’m a Fincher fan.  The Ghost Writer, Polanski’s polished political thriller, has a pair of formidable obstacles.  First, it was released nearly a year ago, and Oscar voters have notoriously short memories.  Second, it was directed by Polanski, whom some people regard as a child molester.  But it was smart, smooth, and seething with low-key suspense.

Inception:   I was enjoying this blockbuster until it suddenly turned into a routine shoot ‘em up, resembling nothing so much as an episode of Mannix, circa 1968, and at which point it began to bore the crap out of me.  Give this movie a nomination for screenplay, give it an Oscar for special effects, and then give it the brush-off.

Newcomer of the Year:

Noomi Rapace of Sweden’s Dragon Tattoo series gave us the most original female character of the year.  If she were nominated for Best Actress, I’d take her over Portman and Bening. 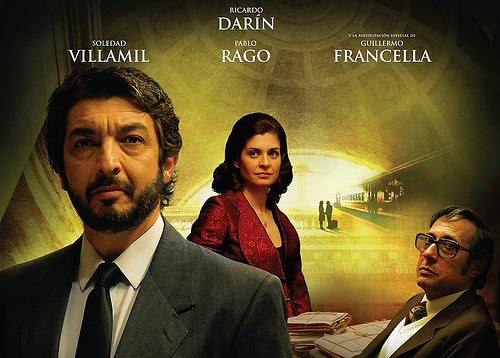 The best movie I saw in 2010 won’t be winning any Oscars this year, because it already has one.  Produced in 2009  but not released in the U.S. until the spring of 2010, Argentina’s The Secret in Their Eyes was easily the film of the year.